How to learn and use guitar chords

Navigate through +100 diagrams with realistic and self-explained graphic.Find the chord you want information about via the menu or use the filter/seach.

How to read the chord diagrams on this site?

1) The image above is a schematic presentation of a chord, a chord diagram.
2) The image show a part of a fretboard on a guitar, on this page you will always see four frets per image.
3) The orange circular dots with white border marks the position for the fingers to be placed in order to play the chord.
4) The red cross marks string that not should be played alternatively muted.
5) To better understand the chord it should be good to know that the first sting from bottom and up is the root of the chord, the so-called tonic. The root is the lowest note, pitch-wise, in a chord. 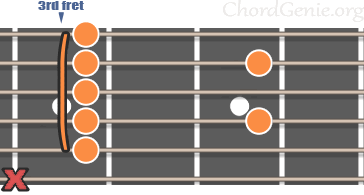 1) When a line, or a slur, is shown left to the dots it tells you that it is a bare chord, which means one finger (in most cases the index finger) should be laid across several strings.
2) When a number followed a "fret" is shown this indicates that the first fret on the left of the image is not the first fret on the fretboard. On the chord diagram above frets 3-7 are shown.

How to understand the chord names?

Flat and sharp symbols can be written in some different ways. The most official way is to use these symbols: ♭ (flat) and ♯ (sharp). Some visitors may, however, not see these symbols depending on which font they have installed on their computer and depending on if their browser support these Unicode Characters. The chosen solution is therefore to avoid these symbols and use common signs (b and #), but to make them more readable they have been written with superscript, as in Absus4.

As you may know, C# and Db is practically the same thing. Therefore, the C#m7 and Dbm7 could be played exactly the same. But to make it easier, both C# and Db and so on are both presented separately on the site. These are all the enharmonic tones:

These five pairs are in other words “the same” concerning chord shapes.

The purpose of this site is probably obvious. It is a resource on web for finding chords for the guitar. Besides that, I actually made it for my self. The collection of chords with pictures is for my own benefit. I wanted to collect all chords I needed and sort them in a system that would be easy for my self. Of course, I probably don't ned to look how to plat a regular C major chord, but ChordGenie.org would be very incomplete without the basic chords.

There is also chord progressions I have come up with (instead for having them as notes on lots of papers I have collected them all in one place and fitted with relevant chord presentations. In adition, there are progressions from known songs (in these cases it's no full songs, but mostly fragments).

Regardless if I'm use a desktop, a tablet or a mobile the site should be easy to navigate. Therefore is the nav menu scrollable on smaller screen resolutions.

As I learn new chords that I think would be handy to keep a record, if lost from memory, I will place them here. So far the site is in "beta" version. It will be expanded with lots of more chords and info about them from now on.

Now, go to the nav menu above and choose a root tone and a chord category, or explore all the chords.